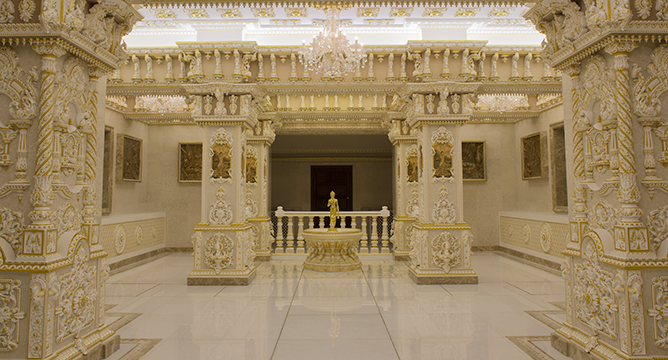 The Abhishek Mandap is a marble chamber on the lower floor of the main Mandir housing the sacred image of Shri Nilkanth Varni, the teenage form of Bhagwan Swaminarayan.

After renouncing his home at the tender age of 11, Bhagwan Swaminarayan embarked upon an epic journey of spiritual awakening that took him around India, into Nepal and Tibet, and through Myanmar (Burma) and Bangladesh. During this time, he came to be known as Nilkanth Varni. Barefooted and alone, Nilkanth walked 8,000 miles over 7 years, blessing the land and liberating numerous spiritual aspirants along the way. Carrying no maps, no food and no money, he crossed raging rivers, faced ferocious animals, and survived the freezing winter of the Himalayas. His solitary journey is a story of courage, kindness, and enlightenment.

To commemorate and pay tribute to Bhagwan Swaminarayan’s arduous journey, Pramukh Swami Maharaj ceremoniously dedicated the murti of Nilkanth Varni at the Mandir on 6 September 2004 allowing for a daily routine of abhishek and worship. 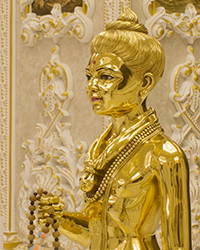 Abhishek is the ancient Hindu practice of pouring water over the sacred image of God to honour him and to attain his blessings. It is also an opportunity for devotees to pray to God, asking him to cleanse one’s soul. To learn more about the abhishek ritual and its religious significance, please click here.

The chamber is clad with Brazilian and Italian marble and embellished with intricate traditional designs.

The murti of Nilkanth Varni is gilded brass. He is depicted mid-step (in classical contrapposto pose); emaciated, yet with a calm and resolute look. With hair matted above and a small gutko (handwritten manuscript with excerpts from sacred texts) wrapped in a kerchief around his neck, he is wearing nothing but his loincloth tied at the waist by a jute cord. In his left hand, he is carrying a dand (wooden staff) and kamandalu (drinking pot made from dry gourd), both common marks of Hindu asceticism.