Aesthetically brilliant and technically precise, the beauty and discipline behind mandir architecture enjoys a long and celebrated history in Hinduism. Few places reach so far into the heart of the Hindu faith and into the faith of the individual Hindu.

Presented here is a brief insight into how mandirs originated and developed, and the rigorous scriptural prescriptions for creating a traditional Hindu mandir.

For millennia, Hindus have given expression to their veneration, awe and adoration of the Divine and its many emanations – whether through prayers, hymns, or sacrificial offerings such as yagnas. These offerings were a daily feature of religious life in the early Vedic period.

The yagnas involved fire pits or altars where rituals were performed outdoors. To protect the fires from being extinguished by the elements, shelters were often erected over the altars. Over time, these developed into shrines, and the early mandir was born.

The altar of the sacrificial pit developed into the garbh-gruh (inner sanctum), and the shelters became larger, more elaborate, and stronger.

Before the end of the Vedic period, artists and sculptors began to make visual representations of the deities they worshipped. These images became murtis as they were ritually infused by invocation ceremonies, so that they could be installed in the garbh-gruh.

Soon, the discipline of mandir-building developed. 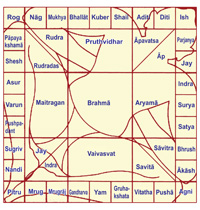 Underlying every traditional Hindu mandir is an ancient, exact and religious discipline called Vastu Shastra, or Sthapatya Veda, the ‘Discipline of Sacred Architecture’.

It integrates the best of time and space for a harmonious relationship between dweller, dwelling and the cosmos.

For mandirs, it aims to create spiritually charged and conducive spaces, bringing together the Divine dweller and the sacred dwelling, as well as the worshipped and the worshipper.

Vastu Shastra is presented in a corpus of Hindu texts developed from Vedic times incorporating the art and technical details of mandir-building. Consisting of a consolidation of material from the Atharva Veda, various Agamas (literally ‘tradition’ texts), and their appendages, this large body of literature deals with a blend of religiously grounded art, astrology, geology, ecology, structural engineering, sculpture, drawing, mathematics, ethics, and spiritual discipline.

How Mandirs Were Built

The various religious treatises of Vastu Shastra provide precise guidelines about each aspect of the mandir and how it should be built – from the initial testing of the soil, to the final dedication.

To read what ancient Hindu texts as well contemporary sages and scholars have to say about the mandir, please click here.

From first seeking permission from the earth to build upon it, to finally thanking it when complete and begging forgiveness for any injury incurred in the process, every stage of a mandir’s construction indicates a tender, caring, and respectful relationship with nature.

This rapport is further reflected in the architectural features of a mandir which allude to the features of the natural world.

Thousands of years ago, the ancient Hindu seers prayed and meditated in the mountains, in forests, and in caves. When they built mandirs, they aspired to evoke the best of nature within them – its beauty and serenity, its power and prowess. So the shikhars (spires) that rise to reach out for the skies represent mountain peaks; the columns, a forest of trees; and the recessed shrines, the caves. Under the central dome, worshippers can stand as if under the open sky shimmering with a constellation of stars, the entire cosmos and its celestial beings beaming down with their blessings and benedictions.

If the shape of the shikhar is square, the mandir is said to belong to the Nagara class; if hexagonal or octagonal, to the Dravida class; and if circular or elliptical, to the Vesara class.

In all three styles, the shape of the shikhars is usually curvilinear, pyramidal, and a mixture of both, respectively.

The Vesara style is not as prominent, found mainly in some central and south-western parts of India. The Nagara style predominates in north and west India, while the Dravida style is common among south Indian mandirs, especially with their distinctive gopurams – elaborate towering gateways replete with carved figures.

Mandirs within the Swaminarayan tradition are all of the Nagara style.