Derived from the Sanskrit verb-root ‘drush’, meaning to see or perceive, darshan refers to the act of beholding the Deities and divine personalities with reverence and adoration. This is also extended to places and objects which have been sanctified by their holy presence. 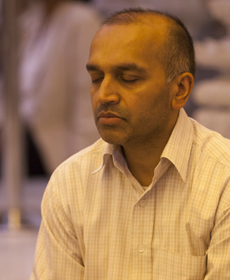 Darshan represents one of the most basic and fundamental forms of worship for Hindus. So much so, when a Hindu visits a mandir, he or she does not say ‘I am going for worship’, but instead, ‘I am going for darshan’.

With the living presence of the Deities within the sacred images, darshan takes on another powerful meaning. For not only does the devotee come to behold the Divine in the sacred image, but simultaneously, it is an opportunity for him or her to be seen by the Deities themselves. This reciprocity of ‘seeing’ and ‘being seen’ is a profoundly enriching and fulfilling aspect of the devotee-Deity relationship made possible through murti puja in the Mandir.

While engaged in darshan, devotees will invariably join their palms and bow their heads as an expression of their reverence and humility before the Deities. This is called ‘pranam’, and is a gesture one sees often among Hindus, even as a form of respect when greeting or bidding farewell to friends, family and guests. 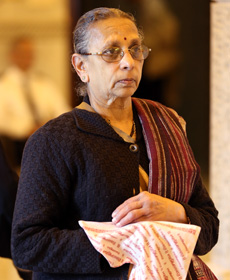 Other acts associated with darshan include dandvant pranam and panchang pranam where devotees prostrate before the Deities, again, in an expression of deep humility, reverence and service. It symbolises the conscious offering of one’s self through body, speech and mind to the Deities.

To further absorb the divine atmosphere of the Mandir, devotees can also be seen circumambulating (or walking clockwise around) the shrines. This is called performing pradakshina, and consolidates the realisation that God is the centre of the universe and our lives.

Some devotees will also chant the holy name of God while doing darshan of the Deities, often using a mala (a rosary of 108 beads).