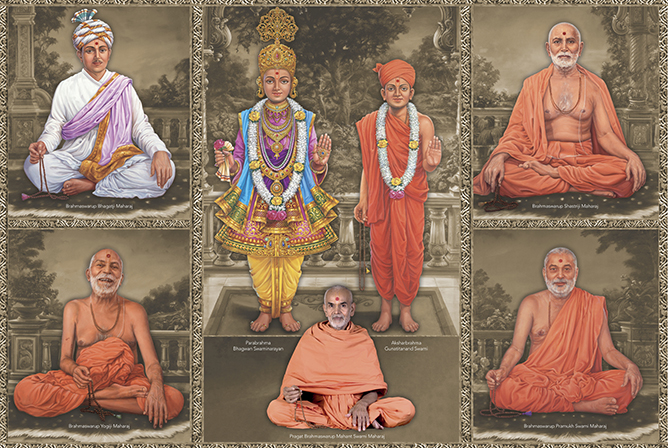 In a sermon delivered on 25 November 1822, Bhagwan Swaminarayan revealed his purpose behind building mandirs. He explained: “It is so that upasana [correct theological worship] is upheld that I have built such mandirs” (Vachanamrut, Gadhada-II.27).

This ‘correct theology’ is espoused through the murtis enshrined within the Mandir.

As Purushottam – the highest being, or God Supreme – Bhagwan Swaminarayan is the prime focus of all worship and devotion.

Central shrines in some BAPS Swaminarayan mandirs house only these two murtis – of Gunatitanand Swami (Akshar) and Bhagwan Swaminarayan (Purushottam) – revealing that one must become like Akshar to worship Purushottam.

To further explain the ultimate fruit of such worship, some mandirs (like the one in London) also house the murti of Gopalanand Swami alongside Akshar and Purushottam. He serves as an exemplar of how a soul can become liberated (mukta) having realised Purushottam after becoming like Akshar.

Together, the three murtis are concisely referred to in the BAPS Swaminarayan tradition – from left to right as one faces them – as ‘Dham, Dhami and Mukta’, respectively: Gunatitanand Swami as Dham (the transcendental abode of Purushottam, called Akshardham), Bhagwan Swaminarayan as Dhami (the supreme lord of Akshardham), and Gopalanand Swami as Mukta (a representative liberated soul within Akshardham).

Another significant feature of Swaminarayan Hindu Theology is the belief that Purushottam wholly dwells in and works through Akshar, who continues to manifest on earth in human form as the Brahmaswarup Guru. This unbroken succession of gurus (enlightened spiritual guides) is called the Guru Parampara. In the BAPS Swaminarayan tradition, this has continued from Gunatitanand Swami (1785-1867), Bhagatji Maharaj (1829-1897), Shastriji Maharaj (1865-1951), Yogiji Maharaj (1892-1971), Pramukh Swami Maharaj (1921-2016), to the present guru, His Holiness Mahant Swami Maharaj (b. 1933).