Shri Krishna is an avatar of Vishnu and a popular deity for Hindus around the world. He manifested on earth thousands of years ago on the Hindu calendrical day of Shravan vad 8. This year, that day falls on Saturday 24 August. It will be celebrated at the Mandir with a host of devotional festivities, including a ceremonial offering of food (the ‘annakut’), singing, chanting, and an arti signifying the auspicious birth. 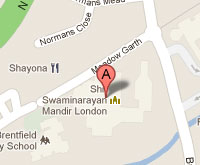 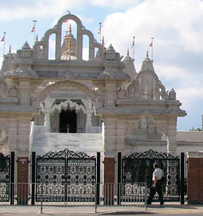 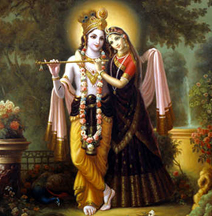 Shri Krishna, one of the avatars of Vishnu, graced the world approximately 5,000 years ago.

Though born into royalty, he was brought up as a cowherd. Thus, he is frequently seen pictured with cows and gopis (female devotees of the cowherd community).

Playing the flute, he won the hearts and souls of devotees.

His closest and dearest devotee is Shri Radha, who exemplifies unflinching love, total dedication and acceptance of the Divine Will.

The teachings of Shri Krishna are documented within the Bhagavad Gita, in which he outlines the basic tenets of true spirituality and encourages Arjun to fight for the greater good by defending righteousness.